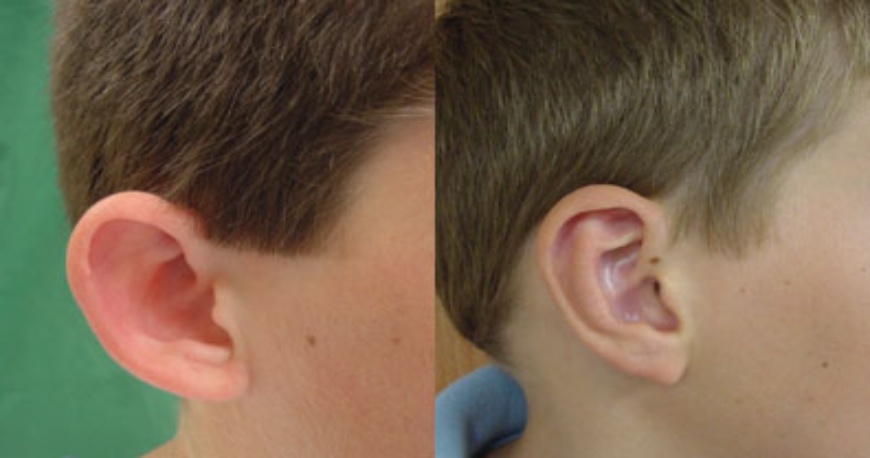 It is not uncommon for people to be unhappy about the appearance of their ears. Ears that visibly protrude from the sides of the head, are larger than usual, asymmetrical or have an unusual shape can cause great distress.This is also called Prominent ears or Bat-ears. This condition is treatable with ear plastic surgery and the best time to treat this is when the kid is more than seven to eight years old. The ear cartilage is large enough to withstand shaping.

There are other ear deformities which might need reshaping such as lop ear or cup ear. In most cases, Otoplasty, also called ear reshaping or ear pinning, can correct the issue with excellent results. Otoplasty not only provides a cosmetic improvement but also a psychological improvement as well. Otoplasty, or ear surgery, refers to the surgical correction of ears to pin them back, reduce them in size, correct a deformity, or make them more symmetrical.

Who is it for?

What is Ear Reshaping/Otoplasty Surgery?

Otoplasty is commonly performed as a day-care surgery and takes approximately 1-2 hours. An incision is made just behind the ear, in the natural skin fold where the ear is joined to the head. Cartilage may be sculpted and bent back toward the head with non-removable sutures used to help maintain the new shape, or cartilage may be removed to create a natural-looking ear fold. Incisions are usually made behind the ear or within the ear creases.Dressings and/or bandages will be applied to the ears post-procedure for added support and protection.

The procedure we use at Yuva Aesthetics to correct prominent ears is a modern popular technique, which involves reshaping of the ear cartilage with significant sutures. This technique is very safe and effective.

Lips are the visible part of the human body that is noticeable very first when someone looks at you. Lips are the most sensory zone that is considered as erogenous part plays a key role in intimacy and choosing a mate. Therefore, having an appealing lip is anyone’s in the demand list, but not everyone is blessed with alluring lips.The injectable dermal fillers are performed as an outpatient procedure. The lip areas where it is needed to inject the hyaluronic acid are firstly numbed by the topical numbing agent. Since hyaluronic acid is already present in the human body there is no chance of side effects. The areas around the mouth where fillers are needed to inject are firstly marked and then injections are given in order to achieve a fuller outcome. The lip fillers generally take 15-30 minutes to complete.

A proportionate chin complements the face and angular cheeks are considered a mark of beauty. The problem of sagging cheeks and a unshaped chin can now be solved without you having to undergo surgery. A supermodel like look can be achieved in no time with the help of Dermal Fillers based Cheek and Chin augmentation. The fillers are injected beneath the skin in the targeted areas using a microcannula. Once the filler substance has been injected, it plumps up the cheeks from beneath and also fills out wrinkles simultaneously. When injected underneath the chin, it restores lost volume and makes the chin smooth and youthful.

The nose is a prominent facial feature that adds beauty to a person’s face. A person may feel inconfident if the nose not perfectly shaped. At Yuva Aesthetics, Patiala we offer nose reshaping with minimally invasive procedure. This technique involves the use of Dermal Fillers to reshape the nose. Dermal fillers are gel-like substances that are injected under the skin to give volume to the nose of the patient. They make the injected area appear naturally full, smooth and plump.

A sharp and chiseled jawline makes all the difference when compared to a barely visible jawline. The jawline also loses definition as ageing sets in. At Yuva Aesthetics, Patiala we can give you a sharp jawline that you have always dreamed of. Jawline can be contoured with the help of Dermal Fillers. The filler is injected and your jawline gets a sculpted yet natural look. A good jawline separates the neck from the chin and cheeks and that’s what we aim to do when we contour your jawline at our clinic.

Eyes being a primary way of facial expression are the central focus of gauging a person’s beauty always. Beautiful eyes are ever desirable and brighten up the face.The first signs of ageing are usually seen around the eyes. Under Eye Volume loss in form of hollowing and eye bags give appearance of tired and aged look. This can be corrected by a minimaly invasive procedure of injection of hyaluronic acid fillers. Dermal fillers are gel-like substances that are injected under the skin to give volume and contour to the hollowing areas around the eye. They make the injected area appear naturally full and smooth.